The cellar once had a light-well, however this was built over in the 1990s. 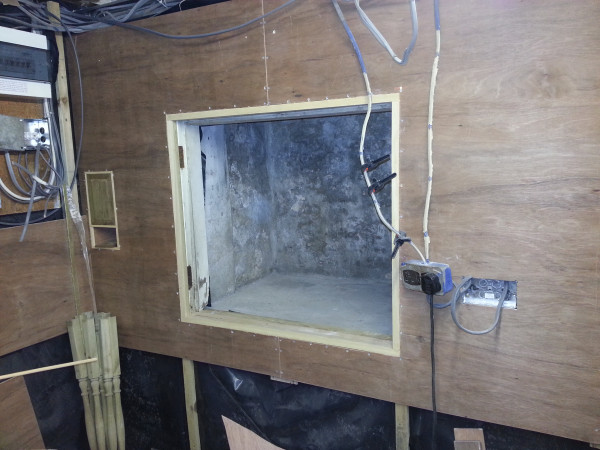 To the left of the big 'ole is a small cupboard and drawer that I built into the old coal shoot, which also became redundant after the building of the extension in the 1990s. This small cupboard and drawer will eventually be hidden inside the electricity cupboard so will hold things like fuses, flashlight, or more likely my workshop mug, coffee jar, teaspoon and biscuits. To the right is one of the many new power sockets being installed. Hanging next to the new socket is the old socket that is my only source of power down there at the moment.
I could have just panelled over the 'ole, but I begrudged the loss of space. I could have just shelved it out and be done, but I wanted something a little more interesting and useful. So I designed a chest of drawers on sketchup. I based the design on a Gerstner tool chest, scaling it up somewhat to fit the 'ole. Getting a tight fit to the 'ole threw up some really odd dimensions. If I'd been making this free-standing I would have rounded up or down those awkward point three millimetres and such like. 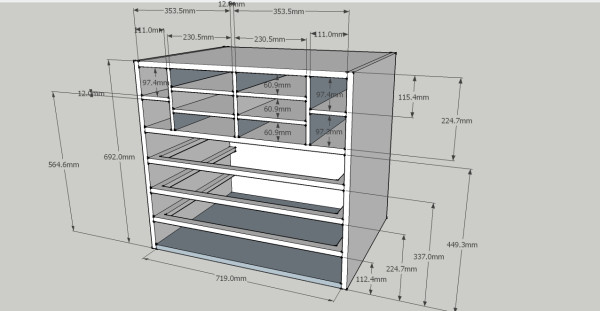 Yes I really do cut plywood to an accuracy of millimetres to one decimal place.
I juggled the saw fence a little to the left of .5mm for anything under and a little to the right for anything over.
It's good enough for what I'm building.
Today I finished building the chest and shoved it in the 'ole. Oh dear! Look at the state of that floor. Can we spot a trip hazard? 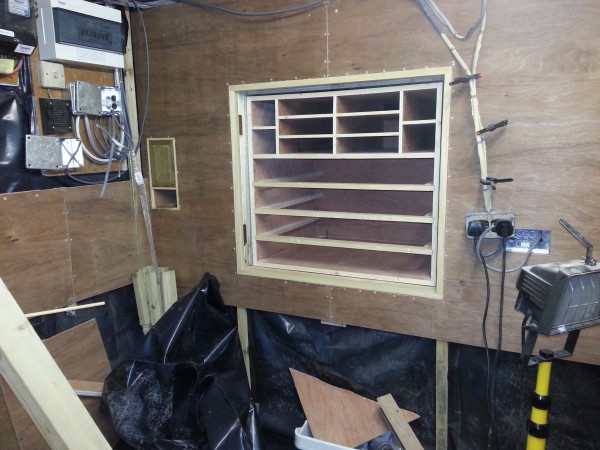 Don't worry most of that wiring isn't live... yet.
The act of actually shoving it in the wall was somewhat involved, I was a little hampered by the weight of the chest, my inability to get my arms right around it, and the extremely snug fit. Gripping the outside was a little difficult due to the chest being wrapped in plastic DPM. I'm pretty sure the 'ole is going to remain dry, but I wrapped it... just in-case. That's been the attitude with the rest of the cellar build, "Cover it in plastic, just in-case.".  The plastic extends to the floor and if damp is discovered it can be whisked away by a guttering system and the sump-pump. But so far the walls remain dry and if they remained dry in the last year we've had, they should remain dry until Noah takes up boat building again.

Next I have to dust off the dovetail jig and make fourteen drawers.