"Ding, dong!" I'm staggering around the bedroom trying to get dressed before I'm really aware of what I'm doing, while the dog barks her usual warnings, that I think translate from dog to human as "Alert! Alert! Armed and dangerous intruder and the mouth of the tribe cave!" repeated over and over.

Finally found jeans and a t-shirt and managed bleary-eyed to put half the items of clothing on the correct way round and the right-side out. Got downstairs pushed past the dog who by this point has upped the alert to ear splitting intensity. I hold back the dog with one foot and open the door to the jolliest skip lorry driver in the world. I look over his shoulder and see the skip on the back of the lorry and after a while I start to understand his words. "A skip? For me?".
"Yeah. Can you move the car?" He asks.
"Errr... I'll have to move the car." I suggest. I go back in past the dog, who has cranked down the alert to defcon 2, and I blunder around the house trying to put on boots, find car keys and adjust my clothing. Keys found, boots on, and t-shirt now the right side out I step out to move the car. Cold air wakes me a little, and mentally pinching my frontal lobe in key places (a technique now only taught in Tibetan monasteries) I am awake enough to both drive the car and realise the reason my t-shirt feels odd around the chest and neck area is it's probably the wrong way round.

Car moved, skip man leaps into action. Hydraulic rams flip the skip onto my drive gracefully arc and seemingly effortlessly belying the weight of the skip. Skip man leaps over my wall to unhook chains and bounces back again with a happy grin. I watch on astounded at the speed of it all. Signed the slip, read the restricted materials notice, no fridges, no asbestos, no human remains, no nuclear waste...

Well as every one else seemed to want to start early, I grabbed a coffee and started moving the last few things out of the garage, and moved the wiring and light switch out of harms way. While I was doing that Steve the roofer arrived with timber and a RSJ. Then the brickie arrived, and right now he's knocking down the front of the garage. Alarmingly, most of the parapet just came away in his hands and could be wobbled from side to side easily. I astounded the front of the garage didn't come down in the wind sometime last winter. I think the decision to start this work was made just in time before it put a big dent in my car or worse still... put a big dent a person. 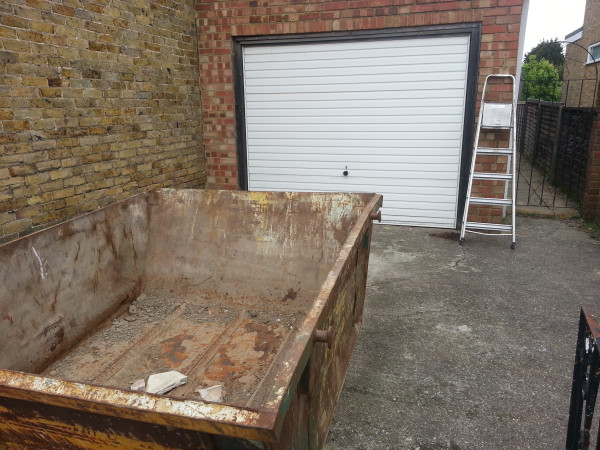 The old garage built some time around 1969/70,
with no attempt whatsoever to match in with the house and only a cursory attempt at stitching it in. 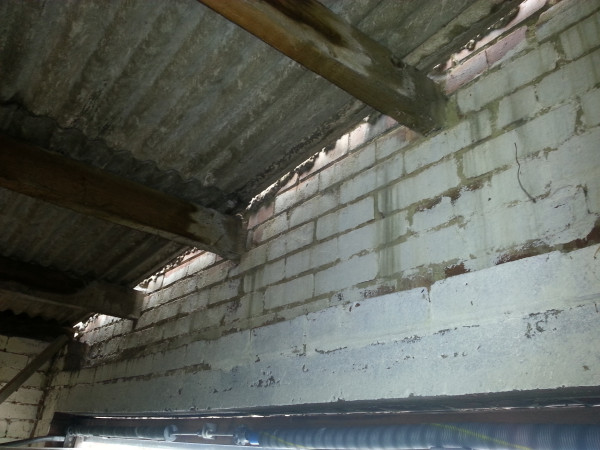 Photo taken before demolition showing gap between roof and wall providing additional light and ventilation.
The gap is actually where the parapet is leaning out about 30mm. Well not any more because it's now... 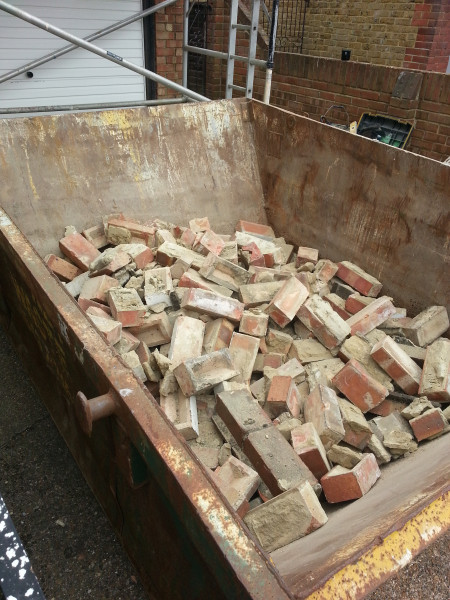