As part of the work to get the bedroom ready for the new radiator I just took off the old architrave off from one side of the door frame. As I suspected from the evidence it was not original. A number of clues, too plain (1930s or later), no scar from the removed original rim lock keep, really bad bit of mitring in one corner and badly filled. Once the architrave was off it was even more obvious, modern nails holding it on and I can see where the original nails were. Best of all I've found what I was hoping for, a shadow of the original architrave's profile in the bitumen paint on the floor. It's a little faint towards the door-frame but hopefully there will be a better shadow on the other side. But I have 11 other chances to find a better profile upstairs and another 8 downstairs, failing that I should be able to put together a composite from all of them. 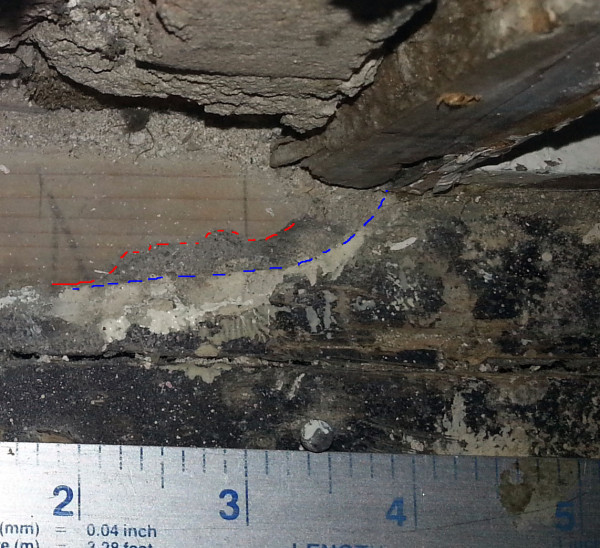 The blue line is where the modern replacement came out to.
The red line is the original Victorian.
One I have a full tracing of the architrave profiles (and I know it could be different downstairs) I'll be restoring all the architrave back to as close as I can to the original, even if I have to machine the profile myself.

In other news...
Thanks to friend Paul for sending me some pages from The Times for the day George Brown was signing my bedroom wall back in 1898. Weird to think of the first people who lived in my house were aware of some of these news stories. I will have to follow this up with a look at some local newspapers for the period.

In other, other news...
My garage has a new front wall. It matches the yellow and red brick of the house much better, the parapet isn't leaning over and about to kill anyone walking by underneath, best of all it it isn't parting company with the rest of the house. Tomorrow they start of stripping off the old roof and replacing it with a nice new weather proof one.
Subscribe