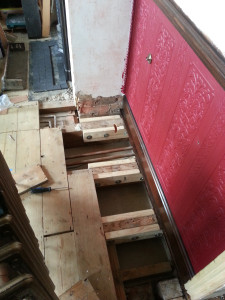 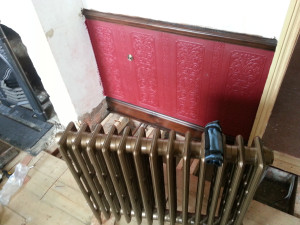 Once I'd got the wall and floor ready I headed down to the garage to see how work there was progressing. 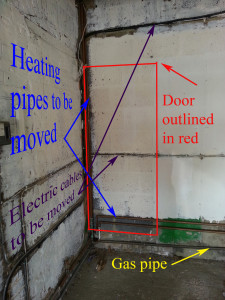 This is what needed to be done.
The position of the gas pipe close to the central heating pipes is the reason this wasn't a DIY job. The gas meter had to be disconnected and pipe empty due to soldering with naked flame.

Pipes were all neatly moved away from the new door area. Just leaving the wiring to move. I also need to insulate all the water pipes in the garage, I must be losing quite a bit of heat before the water is even out of the garage. Once the garage was done and the bathroom radiator plumbed in, Dave moved on to the bedroom radiator, I was very relieved that all my measurements lined-up and everything fitted into place just right. 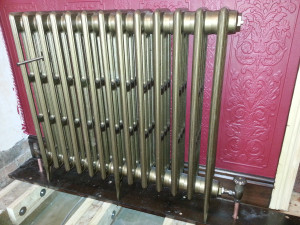 The only snag with the whole job was a missing clamp, needed two only had one. Got a second one on back order and a hole on the wall ready to fit it when it arrives.

Right now I'm camped out in the spare bedroom, the front bedroom being in turmoil and my bed's standing up in the corner on its foot-board. Well I'm in the spare bedroom and I've just noticed that when I turn this room into a bathroom, I'm going to need to move some of the pipes Dave moved yesterday again. D'oh! You know what? That just maybe a DIY job because it won't involve soldering near the gas pipe.

Today Number One Lodger and I removed the old radiator from the front bedroom. Amber helped too. 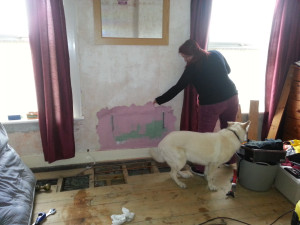 We found a lot of fluff and an old sock.
Subscribe