It's not all house restoration here.

For a few years now I've been researching my family history. I dip into it now and then, filling in gaps here and there during bouts of insomnia. One big gap was one of my great grandmothers. Last night I had spark of inspiration and searched for a few variations of her name, and found she went by the names Ellen, Eleanor, and Helena. Filled in a lot of gaps and found her sister married the chap pictured below. 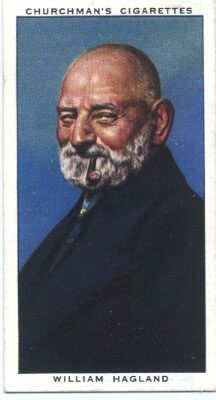 It seems Ellen, Eleanor, Helena lodged with William and two of his sons in later life and much to my surprise I found the above cigarette card of him. It took a while but I have confirmed it's the same William Hagland. Turns out he was one of the drivers of The Flying Scotsman, that's like an astronaut in the 1930s. Then I found this wonderful story about William here....

In the late 1940’s William Hagland had to stand surety at a Metropolitan Police court. Mr Hagland had been featured on the BBC radio programme ‘In Town Tonight’ and had been depicted on one of the series of cigarette cards issued by Churchmans to celebrate the people who had appeared on the show. Mr Hagland produced the card which bore his likeness and the magistrate accepted it as evidence of his identity.
I really want to find the Court transcript. I've found a couple of other remembrances of William on the Web, it seems he was quite a character. If by any chance there are any family of Mr Hagland reading this, I love to hear any other stories. I've become quite fond of Mr Hagland and feel very grateful towards him and his sons for taking in my great grandmother.
Subscribe